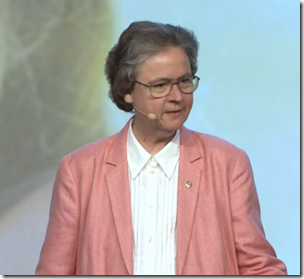 I’m really making progress. I’ve finished reporting on Thursday at RootsTech 2014 and I’m on to Friday! If the past is any indication, it takes me so long to report on the entire event, I reach complete memory sterility prior to completion. I forget everything I heard and have no recollection whatsoever of what my notes mean. (“Tim Sullivan said that?”)Typically, Saturday and Ancestry.com are the worst fatalities. (“Someone must have said something at the Ancestry.com luncheon.”)

I hear it from everyone. Other bloggers. Other story tellers. Other genealogists. Judy Russell, the Legal Genealogist, did a terrific job with her Friday morning keynote address. I heard today (as I write this) that a group of non-English speaking journalists from another continent thought it was great and were eager to see it translated into their language. (All recorded sessions will be translated into Spanish, Portuguese, French, Italian, German, Russian, Chinese, Japanese, and Korean languages by 1 April 2014 according to the lds.org website.)

Her presentation was inspired by a quote by NARA archivist, Aaron Holt.

“It only takes three generations to lose a piece of oral family history. … It must be purposely and accurately repeated over and over again through the generations to be preserved for a genealogist today.” Russell illustrated with a Revolutionary War story of her ancestor David Baker and his forgotten little brother, Richard.

FamilySearch’s CEO, Dennis Brimhall is quoted as jokingly saying, “We’ve had [some number] of stories uploaded to FamilySearch, some of which are true.” Russell related some stories, some of which were true, from her own family and then posed a question.

“How do we get to purposefully and accurately pass down our family stories? The only real way I know is to follow the best practices of our field, the standards that all genealogists should work towards, standards that help us understand the genealogical proof standard.” She then taught some solid genealogical skills. It was a first for RootsTech keynotes. And it was unobtrusively woven into an address I felt was enjoyed by both genealogists and potential genealogists.

You can see the presentation yourself at https://rootstech.org/about/videos/?id=3168208970001. Don’t let the cover image warn you off. It may picture Dr. Spencer Wells, who shared the podium with Russell, but it is the correct URL.

When I visited the King Tut exhibit of 1978, I was already, hopelessly engaged in technology and computers. When Wells attended, it sparked his interest in ancient history. He has married that interest with the puzzle solving of science, now studying the evolution of and migrations in human history.

Did you know that humans interacted with Neanderthals in early Europe? Wells found they contributed 1.7% of his DNA. Driving on the freeway to the conference, I found that some humans have more than others.

See Wells’s address in the video following Russell’s. After you’ve watched Russell’s address, read her tale of serendipity in “The Cousin Who Isn’t.”