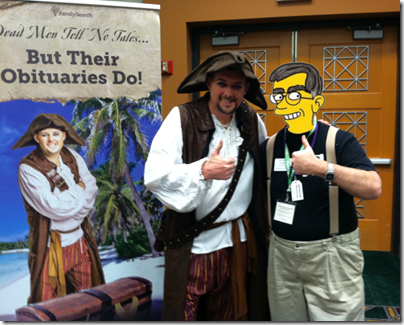 RootsTech began for me last evening, with the FamilySearch blogger dinner. I should have taken a count. This was the largest group I’ve ever seen at this event. FamilySearch pulled out all the stops this time. Dennis Brimhall, FamilySearch president and CEO, spoke briefly to us. During the socializing before the dinner we got to chat with FamilySearch board members, Elder Allan F. Packer and Elder Bradley D. Foster. Both are presiding authorities with the Church of Jesus Christ of Latter-day Saints, which owns, operates, and funds FamilySearch.

FamilySearch repeated several of the messages that they have communicated in recent weeks.

Pirate Capt’n Jack Starling made an appearance as part of FamilySearch’s campaign to index 100 million obituaries this year. “Dead men tell no tales…, but their obituaries do!” is the theme of the campaign. Obituaries are like locked up pirate treasure until they are indexed and published online.

Capt’n Jack will be popping up here and there during the conference. Attendees are invited to get their pictures taken with him, post it online with hashtags #ahoy, #FamilySearch, and #obits, and then claim a bit of treasure at the FamilySearch indexing booth. We were forewarned that he might just be interrupting Dennis Brimhall’s keynote this morning.

Don Anderson spoke about partnerships, reiterating the information released in the announcement I wrote about yesterday. (See “FamilySearch Gives Further Details on Partnerships.”) Regarding FamilySearch spreading its records around to Ancestry.com, FindMyPast.com, and MyHeritage.com, Anderson said, “We want you to be able to go wherever you think gives you the best experience.” He reiterated that FamilySearch has negotiated to make these three websites free in FamilySearch family history centers. (MyHeritage is not currently available; it will be added later this year.)

And he clarified something for me. Members of the Church of Jesus Christ of Latter-day Saints will have full subscriptions to these websites. The announcement was vague as to whether it was access to all records, or just those obtained from FamilySearch. Anderson asked that we please inform Church members that access is not available today. Please don’t call! It will come later this year and announcements will be made at that time.

Anderson said that these partners are also working on a tree-integration technology that will make it possible to transfer information between a tree on their website and the FamilySearch Family Tree. That technology is expected to be available later this year.

“We’ve always been concerned about the quality of the data,” Dennis Brimhall said. They’re excited about the accelerating specification of sources. He said it took seven years for users to add the first 70,000 to the FamilySearch tree. Now users are adding 70,000 sources a week and the total has surpassed 12 million. Users are uploading 5,000 photos a day and 500 stories.

I have to pause here and blow a little steam. To become a certified genealogists or to just be a competent genealogist, one has always had to delve into the details of an ancestor’s life. Genealogists—real genealogists—have always been concerned about the whole story. It’s partly practical. Once you’ve crossed the chasm, full identification and differentiation of a person often requires identification of residences, businesses, church memberships, associates, migrations and naturalizations, court actions, military service, real and personal property ownership, appearance of handwriting and signatures, and any and all other details you can find. Do you know who is only concerned with name, birth date, and death date? “Name collectors.” Those are the people wreaking havoc blindly accepting tree-to-tree hints in Ancestry Member Trees and recklessly merging persons in FamilySearch’s Family Tree. They ignore the dash between the dates. I totally agree with the point Brimhall is making. I love the power of the illustration, the dash between the dates. But does he have to mischaracterize the word genealogy to make the point?

Last year they tested the concept of having satellite sites utilize recordings of RootsTech sessions in local family history conferences. They tested 15 locations in three languages and had an average of 200 people attend at each location. They are expanding that program this year. They have 622 locations signed up across the world, covering ten languages. There’s even a genealogy cruise in the South Pacific that is broadcasting the sessions. (RootsTech in Tahiti? Sign me up!)

Adding on the remote locations, last year’s RootsTech had 24,300 attendees and this year’s is expected to surpass 150,000!

Well, its late and I have breakfast with Ancestry.com early in the morning. I spent too much time ranting and now have no time for proofreading. (I confess. I threw that last punctuation error in on purpose. Anything else really was because I’m not proofreading this article. Good night!)