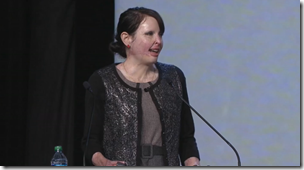 So, I haven’t had the best attitude about the non-genealogist keynote speakers at RootsTech. I had a small change of heart when someone explained to me that having speakers like Ree Drummond brought in people who would never otherwise attend RootsTech. They would pay money just to see her. And once they were in the door, some would look more into this thing called genealogy.

But all that attitude changed with Stephanie Nielson’s keynote Saturday morning. I am forever changed. Her’s was a story of such horrific magnitude, it compels me to be a better person. More patient. More humble. More courageous. More optimistic. More devoted to my family.

“All I wanted to be was a mother,” Nielson began her talk. She appeared to have it all, a happy family, a loving husband. All of that changed in an instant in 2008 when she was in a devastating plane crash. She was burned over 80% of her body.

The pain was unbearable. She was kept in a medically-induced coma for three and a half months. She went through months of grueling, skin ripping physical therapy, sometimes passing out because of the pain.

The depression mounted. “My dream of being that mother that I always wanted to be my entire life was disappearing,” she related. She seriously doubted her children would ever want to see her again.

The missing skin, sores, and scars were gruesome. She was skinny and frail. “I felt like a monster,” she said. Five and a half months after the accident she saw her kids again for the first time. That first meeting was horrible. As much as they had been prepared, they couldn’t be prepared for what they saw. Her daughter was so frightened, she refused to look at her again for three months.

But that meeting galvanized her. “I knew that I wanted to be a mother again, that I needed to work at it,” she said. “I was going to own this trial. I wanted my family back.”

I can’t do it justice. You need to hear Stephanie tell the story in her own words. Go to https://rootstech.org/about/videos/?id=3172446082001 on the RootsTech website and fast forward to 35:40 to get to her place in the program.

It is a story of perseverance, hope, and redemption for a woman who wanted nothing more than to be a mother.