Teaching and prepping has kept me busier at this conference than most, so I’m at least one day behind in writing. Here’s some thoughts from Thursday’s opening session.

At the opening keynote Dennis Brimhall, FamilySearch CEO thanked conference chairperson, Dan Martinez. Dan was avoiding the limelight, busy helping in the trenches. I thought about a study I read recently. Event planners have the 6th most stressful job in America. I sat behind him and his family at the evening program by BYU’s Vocal Point. Dan did not have particularly good seats. They were the best he could find after helping direct things down front until the last minute. I’m sure those sitting around him didn’t realize who they were sitting next to. It was so cute to see his daughters standing and dancing to the amazing a cappella music of Vocal Point. Hat’s off to Dan Martinez. 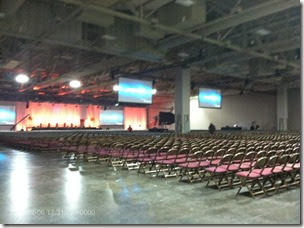 This is a much larger venue than previous years, thank goodness. I just saw a lady walk by keeping touch with her husband using a walkie-talkie!

I taught my session in a hall that seats 4,000 people. That’s intimidating. Fortunately, everyone fit in a small section down front. I was put in the large hall because they were video taping me for later broadcast. They already have the equipment set up for larger purposes and can’t move it to the regular classrooms.

I’ve said it before and I’ll say it again. Having three keynote speakers in a keynote session is too many. Each speaker goes over time making the whole session go late. For the opening keynote session on Thursday, the RootsTech host company, FamilySearch, had to get their time in. The platinum daily sponsor, Find My Past, had to get their time in. That puts quite the time crunch on the 3rd speaker, in this case blogger, cookbook author, and food channel personality, Ree Drummond.

Brimhall gave a top ten list on reasons people came to RootsTech. #9 – It’s almost as big as an Osmond Family Reunion. #7 – It was cheaper than Sochi. #6 – I had a long layover at the Salt Lake Delta hub and had nothing else to do. #5 – The winter air is so good in Utah, you can taste it. #4 – I’m a cowboy and I thought it was BootsTech. #2 – I’m going to have a chat with the arbitrator who dinged my indexing score. And #1 – I came to be part of the largest genealogy gathering of its kind in the world.

Every state in the Union was represented except one. (If you’ve got a friend in South Dakota, twist their arm next year.)

Brimhall repeated a lot of the information I’ve already told you from the partnership announcement before the show and the FamilySearch blogger dinner, so I won’t repeat it here.

He said that a large number of people FamilySearch is trying to reach don’t have computers. To meet that challenge, they created the My Family booklet. (See “FamilySearch Announced My Family Booklet.”) They’ve now shipped 1.7 million copies of the booklet in 21 languages. After filling out the booklet, they or someone else for them, can go online and enter the information into the tree. “We think this is a tremendous starting place for people around the world,” he said.

While many people throughout the world don’t have access to computers, cell phones are becoming common. FamilySearch is looking for ways to capitalize on that. He doesn’t know yet if anything will become of it. “Come back next year,” he joked.

As predicted, Capt’n Jack Starling made an appearance, and made the same plea (do pirates plea? maybe, demand) for volunteers to index obituaries. There can soon be millions of obituaries on FamilySearch.org, but volunteers are necessary. Capt’n Jack warned us, “Those obituaries be tricky business. Be sure to read them instructions before setting your indexing sails.” Brimhall said that obituaries are pure gold. Not only do they tell the story of a person’s life, they often include a photo.

(In a town-hall style meeting later in the day, Brimhall was asked to explain more about the obituary campaign. “We think obituaries are a gold mind but people haven’t been using them because it is too much work to find them…We’ve been meeting with several large companies with newspapers who can get the obituaries but they can’t get them indexed…Hundreds of millions of these are available…We’ve been casting these [index projects] out as a little trial. People love them because there is no handwriting and because there is a story in every one. We think they are pure gold.”)

He showed a map indicating where FamilySearch has 250-ish cameras (I didn’t quite catch the exact number) photographing records across the world. He said FamilySearch is fighting a battle against time and the loss of records.

While talking about partnerships, Brimhall mentioned smaller partners in addition to the large ones getting all the attention.

“We work with partners and they use their creative minds to create cool tools,” he said. 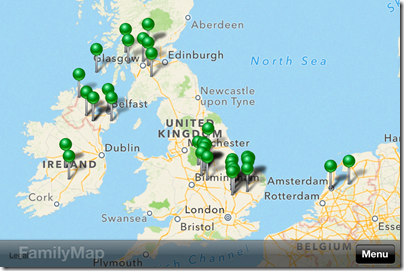 “FamilyMap is a way to see where your ancestors were located. Pins drop down. You can click on a pin to see an ancestor.” 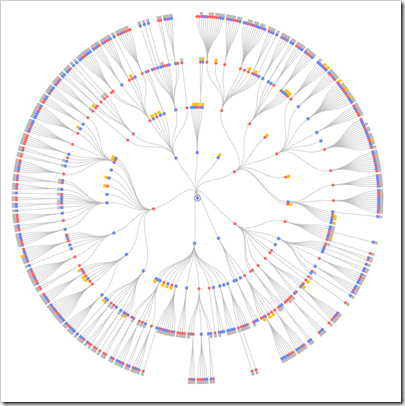 “We’ve struggled in how to show descendencies. The folks at puzzilla.org have found a way to do that.” Brimhall said. Start with your pedigree. Click on an ancestor. Puzzilla then draws a chart showing that person’s descendants. The chart can be used to identify possible holes for descendency research. Hover over a node to see information about that person. Click on the person to open and view that person in FamilySearch Family Tree.

Cool beans. Several weeks ago I had planned on writing an article about these programs and didn’t get around to it. The point I was going to make is that the ecosystem growing around the FamilySearch API is a compelling reason to register for a FamilySearch account and add your data to Family Tree.