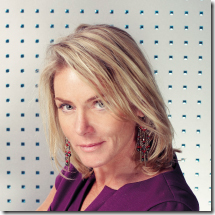 FindMyPast.com is owned by DC Thomson Family History (formerly brightsolid) and Annelies van den Belt is its CEO. She was one of the three keynote speakers on Thursday, along with FamilySearch’s Dennis Brimhall and Ree Drummond. Drummond is a popular (non-genealogical) blogger known as the Pioneer Woman for her adventures married to a cowboy on a ranch out in the sticks. She shared her history, including her growing family. (See her blog article, “Love, Mama of Four.”) RootsTech has a penchant for bringing in non-genealogical bloggers, I think to attract potential, new genealogists. Drummond was one of them.

She spoke about blogging, her family, photography, her cookbooks, her cooking show, and her new series of children’s books. I had blogger envy. I wish I could take photos like she does. (My familial tremors prevent it.) I wish I had interesting stories from my life to share. I suppose I could write about food—recipes using chocolate or reviews of chocolate desserts at restaurants around town. No one is likely to publish a cookbook from my blog posts. I suppose my blog could be the basis of a series of children’s books. (Careful what you say. I suppose I set myself up for that.)

Van den Belt has big expectations for the growth potential of the genealogical community. She’d like to grow the industry to 89 million people. She quoted the figure that 99.9% of people say they are interested in genealogy and 25% of people say they want to know where they’ve come from. When I was an executive of a private company, I learned that market potential was a big factor in determining what a company was worth. Stating it a little simplistically, if you currently have 2 million customers with the potential of growing it to 80 million, you are looking at a company valuation multiplier of 40. That makes even a small company worth a lot to potential investors or buyers. When I was at Ancestry.com, there was unusually high pressure (in my opinion) on employees to acquire new users. I felt it was at the expense of current customers. I think it was precisely to grow the valuation of company value. (Thank goodness Tim Sullivan came along with added emphasis on retaining current customers.) In my experience, you’re not going to get market growth of tens of percentages, but fractions of one percent. Investors don’t want to hear that. Nevertheless, I believe it is true.

I applaud efforts to grow the size of the industry. Ancestry.com’s Who Do You Think You Are, FamilySearch’s RootsTech Conference, FamilySearch efforts within the Church of Jesus Christ of Latter-day Saints, and FindMyPast’s Lives of the First World War memorial website have no doubt reached new individuals who catch the bug, who are here to stay. But in some ways involvement in genealogy feels more like a calling, like the feeling that drives some to become clergy. We all look for that individual in our families; someone we can pass our research down to, lest it be lost.

She noted that Facebook timelines are today’s personal histories. That’s a neat observation. (Maybe FindMyPast will provide a way to externally capture and preserve that story of our lives, lest Facebook lose it or dismiss it.)

Van den Belt announced that FindMyPast is working on three new mobile apps. She emphasized the importance of partnerships. Like FamilySearch, they are creating APIs that allow partners to utilize their resources and technologies. They are working on a new partnership with the Imperial War Museum to produce a website, Lives of the First World War.

She pointed out the power of wider involvement in stories and photographs. Scour your attic, she challenged us. The more people who are engaged, uploading, and sharing, the more we find records about our own ancestors. That’s another great observation. These activities will surely attract a wider audience. We should all join FindMyPast’s efforts to involve more people in genealogy.