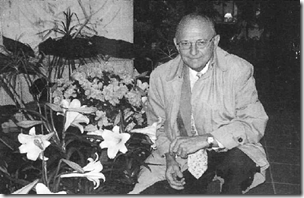 Temples of the Church of Jesus Christ of Latter-day Saints have always been an important part of Dale Zollinger Kirby’s life. So has family history research. And so has gardening. Last month, two days before Christmas, the three came together in a miraculous way.

During his early childhood Dale could see the lighted temple on a hill in Logan, Utah. It always seemed special to him. As a teenager, his family would sometimes go there on Sunday afternoons to see the flowers. His parents had beautiful flower beds around the house and Dale gained an early interest in gardening and worked for a time in a nursery. He has kept a garden ever since, wherever he’s lived.

In 1958 as a newly called missionary he visited the temple. While there he was invited to speak with the temple president, A. George Raymond. President Raymond said to him, "So you've been called to the Swiss-Austrian Mission. There is now a new temple in Switzerland, the first in Europe. You may well have an opportunity to serve in that new temple." The words turned prophetic. A severe illness near the end of his proselyting service necessitated a change in assignment. He was called to serve at the Switzerland Temple instead. He worked in the temple and he greeted the thousands of tourists who came to see the temple and the beautiful gardens. The head gardener had previously been the gardener at Buckingham palace and each Monday Dale would help with the gardening.

In 1976 his job took him to Oregon. Before making the move, it hit him that no one had continued the family history research that his father had done painstakingly for many years. He gathered his siblings together and they organized to further their family history work.

After living many years away from a temple, in 1986 the Church announced that they would build one near Portland, Oregon. Dale was not only delighted, he was asked to assist as a volunteer with public relations for the temple open house. Before each new temple is dedicated, an open house is held allowing the general public to tour the building. After dedication, only Church members in good standing can enter the building. Dale spent countless hours in addition to his regular job. During his service he met with thousands of visitors, civic, educational, and community leaders, and clergy of many faiths.

In 2003 Dale offered his services as a volunteer gardener at the temple. His offer was accepted. Each Monday he would arise at 5:45 and drive 50 miles to work in the garden atrium of the temple. He found the atrium to be a fusion of sacred spaces, a garden of beautiful plants and flowers within a house dedicated to the Lord.

The Monday before Christmas, Dale made his usual 50 mile trip to the Portland Temple. He spent four hours among the tropical plants in the atrium. As he was leaving, a lady stopped her car in front of the temple.

“I have here,” she said, “two major volumes of family names that I would like to donate to some responsible person in the LDS Church.” After attending the open house of the Boise, Idaho Temple, and the open house of the Portland Temple—the same open house that Dale had helped publicize—the woman had felt a strong desire to donate the books to the Church’s Family History Library. She gave the books to Dale, along with a big hug, and left without even telling him her name.

Within the 1,285 pages of the two books, Dale found information that tied into the Zollinger family line!

He submitted one of the books to the Family History Library in Salt Lake City. Because the library already had the other book, he gave it to an accredited genealogist. That genealogist is currently doing a project on one of the families in that book!

We call that, “serendipity in genealogy.”