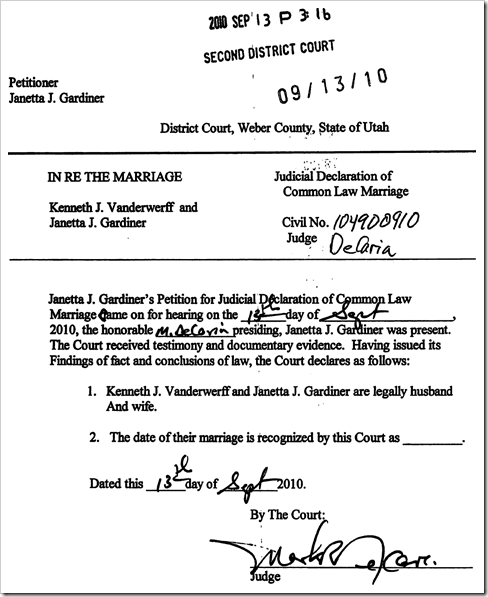 I’m no lawyer, but even I can see there is something really weird about the marriage of Kenneth J. Vanderwerff and Janetta J. Gardiner. Here’s the story as my non-lawyer mind understands it.

Vanderwerff and Gardiner moved in together in 2007, but never married.1 Utah law doesn’t recognize common law marriages without a judicial decree.2 Vanderwerff died on 22 April 2010. Their “relationship was not solemnized as a marriage in any state during Mr. Vanderwerff’s lifetime.”3 As of 22 April 2010, they had never been married.

Gardiner filed a petition asking the court to grant a decree of marriage. The petition was granted on 13 September 2010, making them legally and lawfully wedded. The court can “back date” the marriage to before the decedent’s death. I suppose back dating is needed when the petitioner is seeking survivor benefits or the like and the marriage needs to be effective prior to the death. In this case, that field is blank.4 They became married after Vanderwerff’s death. (Let’s see how your tree program likes a marriage date after a death date! Or maybe you use one of those programs that doesn’t care, no matter how bad your data is.) As of 13 September 2010, they were married.

Relatives of Vanderwerff’s filed various motions with the court, and on 27 February 2012 the court “provisionally set aside the declaration of marriage.”5 As of 27 February 2012, they had never been married.

Darned if records aren’t absolutely necessary to untangle the sometimes complicated knots of our lives.