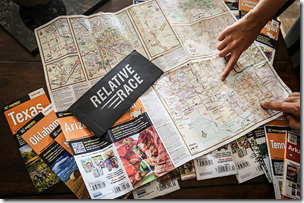 It sounds like The Amazing Race meets Who Do You Think You Are meets AncestryDNA. Relative Race is a new family history television show, but with a twist: it’s a competition. Cameras follow four married couples as they travel across the US in search of long lost relatives, armed with only paper maps, a rental car, a $25 per diem and a flip phone.

The couples embark on a journey that starts in San Francisco and ends in New York City, driving more than 4,500 miles in just ten days, stopping each day in a new city to complete a challenge, and find and stay with a newly discovered relative. At the end of each day, the team that finishes last receives a strike. After three strikes, you’re out. The remaining teams travel on towards New York City for the grand finale, where a $25,000 grand prize awaits the winning couple.

As with the use of Ancestry.com in the Ancestry-sponsored Who Do You Think You Are, AncestryDNA technology plays a role in this AncestryDNA sponsored television show.

The show premiers on BYUtv on Sunday, 28 February 2016 at 8pm ET, 6pm MT, and 5pm PT. (Do you ever stop to wonder why television show times are never given for Central Time? Do television executives believe no one lives in… well, whatever those states are in the Central Time Zone? Or maybe they think people there are good at math. So what do they think about people in the Mountain Time zone?)

You can view BYUtv through just about any media format: cable, web, smartphone, and (where I live) good old fashion rabbit ears. Except cable, all are free. Watch the official trailer on YouTube.