The Power of Story at #RootsTech: Michael Leavitt and Doris Kearns Goodwin 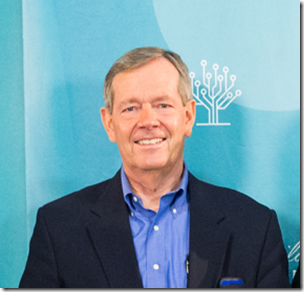 Michael Leavitt served in the cabinet of President George W. Bush as Administrator of the Environmental Protection Agency and as Secretary of Health and Human Services. He was elected for three-terms as governor of Utah, the last cut short by the presidential appointment.

He started with a story that I’m still not certain whether to believe or not. As governor, he honored the state’s centenarians each year. One man reported he and his 99-year old wife had been married for 77 years. After Governor Leavitt congratulated him, the man said they were getting divorced. “Why now?” Governor Leavitt asked. The aged gentleman replied, “Wanted to wait until the kids were dead.”

Michael told us something he did that might be useful for us as well. When he wrote his autobiography, he didn’t start out to write an autobiography. One day he tried to see how long it would take him to write a list of 100 story ideas from his life—not writing the full story, just jotting down several words about it. The list grew to 1,000 stories. Later he thought he should gather them into buckets. Before he knew it, he had a two volume autobiography. He was delighted to hear that it was a grandson’s favorite bedtime story book.

Michael engaged the audience with a cell-phone survey. He presented a list of ten experiences from his life that he could tell. Attendees voted and he told us the selected stories. If you’re interested, watch and listen to the stories in the Michael Leavitt keynote on YouTube. 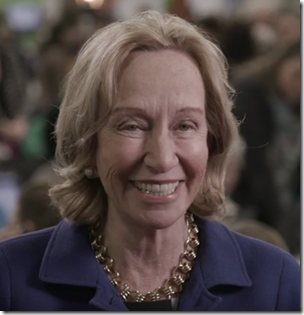 Doris Kearns Goodwin is a world-renowned presidential historian and Pulitzer Prize–winning author. She has written biographies of several presidents. She related stories of triumph and defeat about Kennedy, Johnson, Roosevelts, and Lincoln.

Researching our ancestry allows us to see our ancestors’ struggles and gives us strength to live through our own, she said. “By studying the lives of others we can learn from their triumphs and struggles.” One example she gave was Franklin Delano Roosevelt and his wife Eleanor. As a young man, Franklin was a confident, self-assured lawyer who had already planned his rise to the highest office in the land. Then came polio. He was paralyzed from the waist down. But with paralysis he became more warm hearted and gained humility of spirit. He came to empathize with the poor and those who had had great suffering.

Eleanor Roosevelt also suffered greatly when young. Her mother was emotionally abusive and her father was an alcoholic. Her mother died of diphtheria when she was nine. Shortly thereafter, her father jumped from the window of the sanitarium where he had been confined. He died soon afterwards.

The adversities they both suffered prepared them to lead us when the nation needed their leadership so desperately.

Most of us will not be famous enough to have our own story widely sold. But, Doris said, the private people we have loved and lost in our families really can live on so long as we tell and retell the stories of their lives.

No recording of Doris’s talk was made available. To read other articles about it, see the Salt Lake Tribune, the Deseret News, KSL.com, and a short interview on YouTube.

This concludes my coverage of RootsTech keynote sessions. The dates for RootsTech 2017 are 8-11 February 2016. It will be held again in the Salt Palace just down the street from the Salt Lake City FamilySearch Family History Library. Start planning now!

I still hope to write articles about individual classes, luncheons, and an interview with Kendall Hulet, so stay tuned.