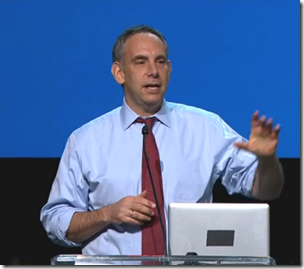 “If I had 40 minutes left to live, what would I say to this person sitting across from me?” That’s how David Isay explained the essence of a StoryCorp interview. David was a Friday keynote speaker at RootsTech 2016.

David founded StoryCorps about a dozen years ago. He put a booth in Grand Central Terminal where you could bring a loved one—a parent, a grandparent, a child—or someone else you respect. The StoryCorps facilitator sits the two of you in the booth, opposite one another. For 40 minutes you pose questions to your loved one and listen to the answers. At the end of the 40 minutes, one copy of the recording goes home with you, and a second copy is preserved at the American Folk Life Center at the Library of Congress. Your great-great-great-great-grandchildren will be able to learn about your grandmother, hearing her own words and in her own voice. So far, 65,000 interviews have been archived. “It is the largest collection of human voice ever gathered,” David said. Weekly, millions of listeners experience a few of these stories on NPR’s Morning Edition.

David said that the setting gives you license to say things you don’t normally get to say. “A lot of tissue gets used up in the booth,” he told us. David shared clips from several examples. It was true. A lot of tissues were used (or at least needed) in the audience.

Carly Dreher interviewed her grandfather Lyle Link, who was 90, about growing up on his family’s farm. “I’m terribly, terribly lonesome.” https://storycorps.org/listen/lyle-link-and-carly-dreher/

“Because of the nature of what happens in the StoryCorp booth, I feel like we’re collecting the wisdom of humanity,” David told us.

Lynn Weaver was interviewed by his daughter Kimberly and honored his father, Ted. Ted Weaver was a janitor in Knoxville, Tennessee. But he was a brilliant, kind parent. Lynn went on to become chairman of surgery, Morehouse School of Medicine, in Atlanta, Georgia. https://storycorps.org/listen/william-and-kimberly-weaver/

After this interview, David quoted a scripture: “And he shall turn the heart of the father to the children, and the children to their fathers.” (As an aside, the importance of this verse of scripture to Mormons is attested by its appearance in all four volumes of scripture canonized by The Church of Jesus Christ of Latter-day Saints. It is, perhaps, the only verse having this distinction.)

Wil had just been diagnosed with cancer at the time of the interview and has since passed away.

Marine Corporal Zach Skiles was deployed to Iraq in 2003 at the start of the United States invasion. When he returned home, Zach found it difficult to hold down a job and soon after found himself homeless. He was interviewed by his father, Scott. https://storycorps.org/listen/zach-skiles-and-scott-skiles-150418/

The StoryCorps website has what David called a question generator, where you can find questions that, in their experience, lead to successful interviews. I thought perhaps any of us could utilize it for doing our own interviewing. You could use the FamilySearch Memories app to save the recording on FamilySearch.org. Or you could utilize upcoming features of Ancestry.com. Or do a video interview.

Later, David told us about the StoryCorps app. It is available from the Apple App Store and Google Play. If you go with StoryCorp, you can have the recording sent to the Library of Congress and shared online with the world.

Mary Johnson spoke with Oshea Israel, the man who murdered her son. https://storycorps.org/listen/mary-johnson-and-oshea-israel/

Twelve year old Josh has Asperger’s Syndrome. Like many children with Asperger’s, he has an obsession. He is obsessed with bugs. He interviewed his mother, Sarah. “Did I turn out to be the son you wanted when I was born? Did I meet your expectations?” https://storycorps.org/animation/q-and-a/

David closed with a quote from Mary Lou Canacki, a nun in Philadelphia. “It’s impossible not to love someone whose stories you’ve heard.”