The significance of another change to the New FamilySearch home page may be lost to those unfamiliar with beliefs of FamilySearch's owner, the Church of Jesus Christ of Latter-day Saints. Recently, the photograph and quote of Gordon B. Hinckley, the Church's immediate past president, were changed to a quote and photograph of Thomas S. Monson, current Church president. This change will gradually be repeated in hundreds of instances, in hundreds of media, but for only one reason.

We require a living tree—a living fountain—living intelligence, proceeding from the living priesthood in heaven, through the living priesthood on earth. … And from the time that Adam first received a communication from God, to the time that John, on the Isle of Patmos, received his communication, or Joseph Smith had the heavens opened to him, it always required new revelations, adapted to the peculiar circumstances in which the churches or individuals were placed. (Link)

The principle of present revelation, then, is the very foundation of our religion. (Link)

So this elementary website change reflects the Church's deep, foundational belief that God has chosen a new prophet to serve as His mouthpiece to His children on the earth.

A notice on https://new.familysearch.org warns that the New FamilySearch website will be down 29 June 2008 and 30 June 2008. "Maintenance" is the reason given.

Speaking of websites being down, I understand that Ancestry's newspaper collection was down for part of the afternoon yesterday, 16 June 2008. 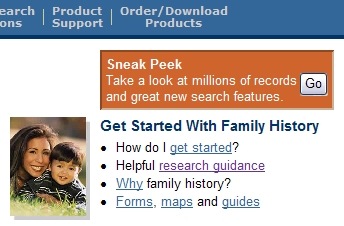 And speaking of notices on websites, the old FamilySearch website is sporting a new addition.

This little puppy shown to the right links to the FamilySearch Record Search pilot website.

I'm no expert. I could be wrong. But this might be an example of what happens when a programmer implements a quick and dirty user interface element without input from a designer.

I'm speaking here as much to myself as anyone else. But here's a word of advice to programmers out there: copy. You don't have to have a lick of design sense if you take a moment to look at the rest of the page (assuming a designer designed it). Yes, chiseling looks cool and may look better (to you and me) than the anemic shadows sported by the pictures on this page. But you're just going to have to trust me when I say we techies see the world differently than normal people.

Now a word about color. We're not only techies, we're male. I'm not saying we're better or worse than other people. But you'll have to trust me when I say that fully saturated colors appeal more to super heroes than the general public. If there is no available female to ask about a color choice, I've found moderate success in sampling one of the colors already used on the page, switching it to HLS, and varying the hue. Keeping the saturation and lightness values the same as designer-chosen colors on the page will usually give a color that fits reasonably well with the rest of the page.