I keep meaning to look up all those handwriting resources on the Internet and really learning to read the old-style cursive. But almost always a simple, tried-and-true approach gets me by. This will be old-news to all but the newest of indexers. But this is such a gem for all you new and prospective indexers, it's well worth covering here.

When you can't read a letter, find it in a word you can read.

Let's look at some examples. Let's imagine you're new to cursive and you don't recognize the middle initial in the name below. Is it C? L? Q? A? G? L? B? You experienced indexers laugh. You have no idea how hard cursive has been for me! I panic and suddenly any weird letter seems possible. Then I remember my method and start looking for the same letter elsewhere. Obviously, Justin's profession, "Clothing dealer," begins with the same letter. The middle initial is a C.

The middle initial C can be verified by comparison to the word "Clothing."

Let's look at more examples. In the illustration below, I had a hard time with Anna middle initial. Can you find it used somewhere else? What about the middle initials of the last Sarah? 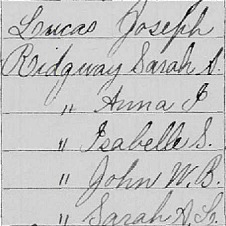 Which of the middle initials in this illustration also appear elsewhere?

You should have found Anna's middle initial, I, also appears in the name Isabelle. Sarah has two initials. You should have found the second initial, L, in Lucas, even though the writer's pen didn't complete the bottom stroke of the L. The first initial, A, is a little tougher, since it looks different in Anna. This happens sometimes when a capital letter appears by itself. Hopefully, though, you could see the correspondence.

When looking for a matching letter, don't forget to look at words other than names, as we saw in the first example. And don't forget that many census projects include a previous page that may contain the letter you're looking for.

Remember. When you can't read a letter, find it in a word that you can read.