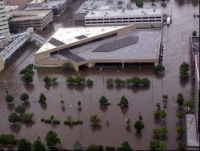 The State Library of Iowa reports three libraries have been seriously damaged:  Cedar Rapids Public Library's main building in downtown; the National Czech and Slovak Museum and Library, located in the Czech Village in Cedar Rapids; and the New Hartford Public Library.

When last I checked, the Cedar Rapids Public Library (CRPL) website was still down. From the CRPL board:

The damage to the CRPL is being assessed. A professional “recovery team” has already conducted a walk-through. It’s estimated that the water rose approximately five feet up the first floor. The book shelves are intact and not all were completely under water. However, we are not optimistic about saving anything on the first floor. The humidity, muck, and air quality are taking their toll.

Books on the upper shelves did not get wet. A lot of the library's collection was saved.

New Hartford did not fare as well. Water destroyed 4,600 books, leaving only 1,000. They lost 5 computers. Only one library board member can help the library's one employee because the other board members lost their homes in the earlier tornado.

The public library in Des Moines has been turned into the city's emergency crisis center. The mayor, city council, essential city departments and 170 employees have set up. The city's television station has been broadcasting from inside the library as well.

Libraries have often become "hubs" for flood refugees trying to find information, see pictures of their homes, check e-mail, use copy machines, etc. Some libraries have added additional computers. Others have extended hours.

Volunteers Save Books in Iowa City

There are reports of several inches of water in the basement of the University of Iowa Main Library in Iowa City, but flood waters did not reach the library. Volunteers came out in droves to help save books, forming a "bucket brigade" to move books to higher floors. Nancy Baker, head librarian made a public plea on the radio and hundreds of people from the university and community responded, hour after hour. Boxes of manuscripts from the basement were among the items saved. 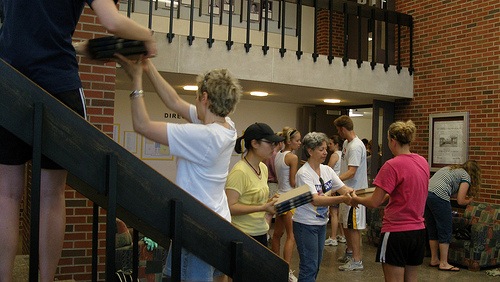