A search of Federal District Court filings and dockets reveals that The Generations Network (TGN) filed a complaint Monday against Millennia and BTH2 alleging trademark infringement. 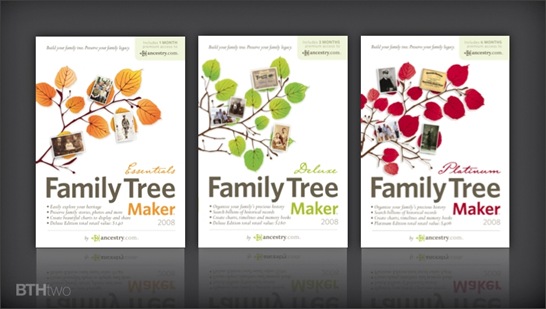 The Ancestry Insider obtained a copy of the complaint from the U.S. District Court for the District of Utah. TGN alleges that BTH2 became a manufacturer, publisher and distributor for Legacy 7.0, redesigning the Legacy box to look remarkably similar to the design BTH2 did for TGN. TGN alleges the similarities are intentional and deceptive. BTH2 provided these services to Millenia in violation of its contract with TGN not to provide similar services to competitors for a year, according to the TGN complaint. 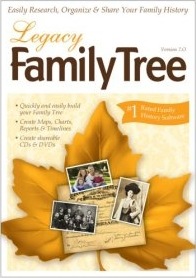 The Legacy 7.0 box design shown on Amazon.com illustrates the common properties of the new design with the Family Tree Maker 2008 Essentials Package:

The complaint also points out similarities between the Legacy website header and artwork from the movie Legacy: A Mormon Journey. The movie debuted in 1990 in the newly-opened 500-seat Legacy Theater in the Joseph Smith Memorial Building in Salt Lake City. In the same building and near the entrance to the theater is a FamilySearch Family History Center. Patrons to the center are in the target market for Millennia's Legacy program.

The complaint shows Legacy media labels were not using the script logo prior to 1997. The Internet Archive for www.legacyfamilytree.com shows the sunset graphic didn't come into use by Millennia until after 1998.

The Generations Network (TGN) confirms it has begun legal proceedings against Millennia Corporation, publisher of Legacy family history software, and BTH2 Inc., the apparent designer of Legacy’s family history software packaging and a re-publisher/distributor of that software. TGN has concluded that Legacy’s software packaging, currently available at retail, clearly violates TGN’s trademark of its Family Tree Maker product and is designed to resemble our trade dress (the look and feel of our branding), in a way that has and will continue to confuse consumers. Since this is an ongoing legal issue, TGN has no further statement at this time.