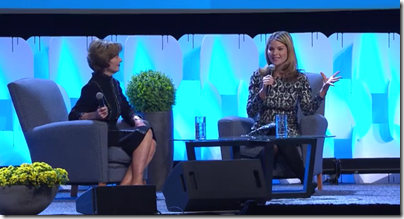 It was a message rich with family.

Former first lady, Laura Bush addressed the keynote session of RootsTech and FGS Friday morning. It was delightful. She was bright, smart, and articulate. (“Reading is one of the guiding passions of my life.” And, “Books have the power to shape our journey as a nation.”) She was self-deprecating. (She showed us a Laura Bush bobble head doll a friend had found—on a clearance rack.) She reported on the doings of all her family members. (“President Bush” celebrated his 90th birthday in June by jumping from a plane.) She was philosophical. (Soon after 9/11 she watched in fear as “George” took the field to throw out the first pitch in New York’s Yankee Stadium. But then she realized it was the job of every American to stand up on the pitcher’s mound and face our problems.)

After her speech, her daughter, Jenna, joined her onstage. Jenna works as a special correspondent to NBC (“continuing the Bush family tradition of working closely with the press,” her mother quipped). In form, Jenna “interviewed” her mother. But conversation bloomed into reminiscing which blossomed into laughter and tears.

It was the election of 1988, the two decided. President Bush was vice-president and running for president. Laura said she and George were out on a date and President Bush was babysitting. It was the night before a presidential debate and President Bush was looking for Spikey the cat, the beloved stuffed animal of Jenna’s sister, Barbara. Barbara had lost Spikey and was quite distressed. Jenna chimed in, “He had the secret service out looking with flashlights! I told him Barb couldn’t sleep without Spikey!” Jenna said that after searching unsuccessfully for an hour, President Bush came in to find them both, fast asleep.

Jenna testified that although they held the highest job in the land, they always put family first.