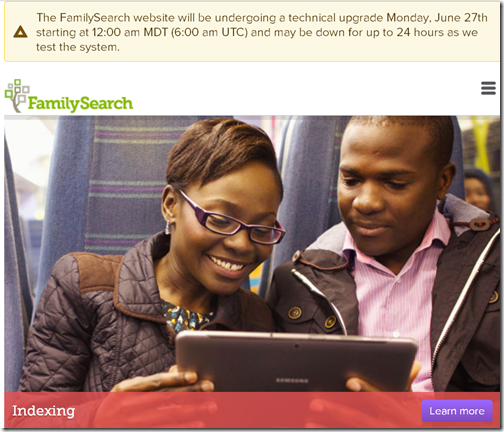 Users of FamilySearch started seeing a banner last week indicating the website would shutdown Monday, 27 June 2016 at midnight MDT (2:00am EDT). The banner warned that the shutdown could be as long as 24 hours. The banner stated that the reason was a “technical upgrade.” I assume that means the basic functionality will be unaffected.

This is big, folks. Nobody shuts their website down for up to 24 hours. Something really important must be in the works.

This announcement comes on the heels of a beta test of the system to break the link between New FamilySearch (NFS) and FamilySearch Family Tree (announced publicly by FamilySearch’s Joe Martel, “Preparing to Stop Synchronizing Between nFS and FamilyTree, on Beta” on the FamilySearch feedback system.) The test was held Friday, 17 June.

NFS is the legacy system that has been hobbling Family Tree from its inception. At RootsTech earlier this year, Ron Tanner explained that even though you can’t directly interact with it, NFS continues to inhibit system functionality. (See “#RootsTech: Ron Tanner – Family Tree in 2016 and Beyond” on my blog.) When the link between NFS and FamilySearch can be broken, a bunch of issues go away.

It turns out that after the link between NFS and Family Tree is broken, there will still be fairly common times when two persons in Family Tree cannot be merged. (See “Preparing to Stop Synchronizing Between nFS and FamilyTree, on Beta” on the FamilySearch feedback system.)

It will be great if next week we finally rid ourselves of NFS.