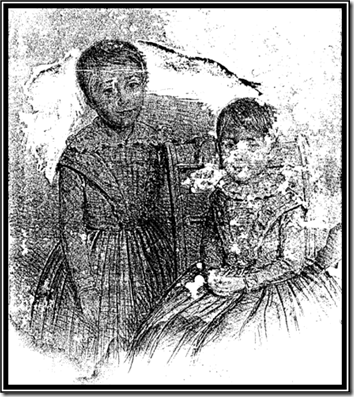 David Rencher had a haunting feeling that he had not accounted for all the daughters of Abraham Rencher, son of his immigrant ancestor. David says,

In fact, I was quite certain that there was a missing daughter. I had visited the graves of most of the family in Pittsboro, in Chatham County, North Carolina. They lined the walk of the Episcopal Church, and as I walked along and recorded each and every tombstone, I still had this haunting feeling that one was missing.

David was in Washington, DC in 1997 meeting with Eric Grundset, director of The Daughters of the American Revolution. About 8:00 David was dropping him at his home when Eric’s wife, Paula, arrived home from her work at the George Mason Regional Library in Annandale, Virginia. Paula and David said hello and David went on his way.

Hi, My wife’s library received a bible in the gift books the other day. They are holding onto it in case someone comes to retrieve it. She copied the family register pages and pointed out to me that the surname is Rencher. Realizing this is probably not your group, I still thought you might be interested. 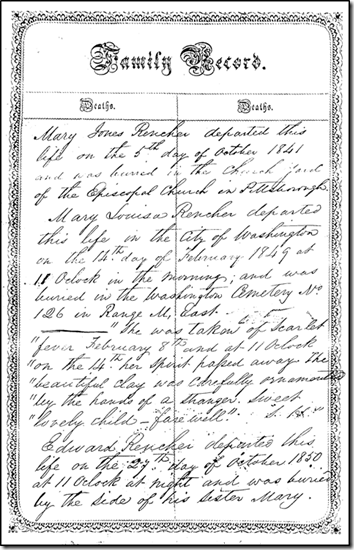 David immediately recognized it was the family Bible of Abraham Rencher. Among the deaths was the missing daughter:

Mary Louisa Rencher, departed this life in the city of Washington on the 14th day of February 1849 at 11 Oclock in the morning and was buried in the Washington Cemetery No 126 in range M East. “She was taken of scarlet fever February 8th and at 11:00 on the 14th her spirit passed away. … Sweet lovely child, farewell.”

Abraham Rencher was a five-term congressman from North Carolina. Because they were living in Washington, this child was buried in the Washington Congressional Cemetery. David says,

I later went over to the cemetery and there amongst the tombstones, was a beautiful tombstone for Mary Louisa Rencher, not buried with her family in North Carolina, but buried in Washington DC.

What are the odds of that Bible coming into David’s hands? David says,

How many public libraries are there in this country? Is it coincidence that the person who goes through the gift box at the Annandale County Virginia Public library is the one person who knows me and who receives this Bible? Is that coincidence? I would submit to you that it is not.

Adapted from “Faith in Finding,” David E. Rencher (fireside presentation, The Center for Family History and Genealogy, Brigham Young University, Provo, Utah, 12 November 2004); online transcript (https://cfhg.byu.edu/Pages/Firesides.aspx : accessed 5 March 2016). Thank you, David, for permission to share your story and these images. Thank you, Eric, for helping me with the details.