Several years ago David Rencher was on business in Atlanta, Georgia and took the opportunity to drive to Montgomery, Alabama where he hoped to visit some cemeteries the following day. The Utah Jazz were doing exceptionally well in the play-offs that year. When he checked into the hotel he checked that they had the right television station to watch the game. He turned on the TV and, lo and behold, the game had already started. He stood there with the remote in his hand when the feeling came: “Go to the cemeteries now.”

“I was impressed and had the TV turned off before, I think, I consciously had finished the thought,” David says. “I put the remote down, left the hotel and headed for the cemetery.”

On the way to the cemetery he passed another cemetery and felt like he should stop. He canvassed that cemetery and found a child of his family that he didn’t know was buried there.

Just getting back to his car, David suddenly heard a pickup truck with very loud pipes zooming down the back-country road. As the dual wheel, double axle pickup truck went flying past the cemetery, the driver looked up, saw David, and came to a screeching halt.

“Hi. What family are you looking for?” David told him and he said, “Oh, they’re not buried here. They’re buried over in Bethel. Why don’t you follow me over there. It’s kind of hard to find.” David gratefully accepted his invitation, not realizing just how fast he would need to drive to keep up.

At the cemetery, his guide knew right where the graves were, so we strode off in that direction. 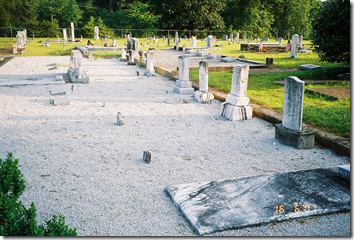 Meanwhile, his guide was marching through the cemetery, talking as he went, unaware David had stopped. Only when he reached their destination did he turn. He came back and David told him this was a family he was looking for. He said, “Oh, are you related to the Bates? Well, then you’ll need to call Bill Bates.”

This gentleman waited while David captured photos and transcriptions at the cemetery and then took him over to his home. He had a complete transcription of the cemetery that he found David in, which he graciously provided. And then he called Bill Bates. They made arrangements to meet at 10:00 the next morning.

David visited Bill Bates the next morning and, of course, he knew all about the family. David was taking notes as madly as he possibly could. Bill stood up and said, “You know, the old homestead is here?” His sister had made a painting of it. Bill pulled a print of the painting off the shelf and gave it to him. Then Bill loaded him up in the truck and took me down to the old homestead. 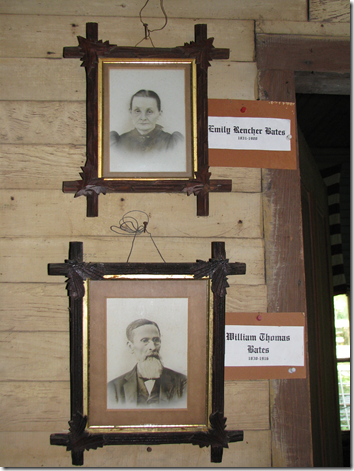 They walked in and there on the wall were the pictures of Emily Bates, Emily Rencher Bates, and her husband. Bill said, “Well you know, the Renchers married into the Harrises. You really ought to contact Martha Ray Harris.” They called Martha Ray who happened to be attending a genealogical society meeting in Greenville that afternoon at 2:00.

David met her at the meeting and she, of course, had with her enormous amounts of information about the Renchers and the Harrises. While they visited the society president walked over and introduced herself.

“This is our president, Mrs. Raybon,” said Martha Ray. “And this is David Rencher.”

“Rencher? Well, you know, the Raybons married into the Renchers,” Mrs. Raybon said. She had all the information and was willing to share it.

In just a couple of days, the wealth of material that came to David was overwhelming.

“I think many times how I stood there with that remote in my hand,” David says. “Had I not gone at that very moment, I wouldn’t have been in the cemetery when the truck drove by. I would have been sitting in Montgomery watching the Jazz lose a game.”