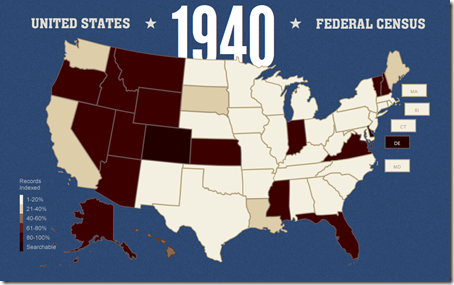 On Saturday horses changed positions in the race to post 1940 census indexes.

FamilySearch.org jumped from last place into a tie with lead horse, Archives.com, both having now published Colorado and Delaware. As I last reported, the two members of the 1940 U.S. Census Community Project ought to always be tied, since they are sharing the same index. While it was surprising that FamilySearch didn’t post Colorado first, one can imagine FamilySearch holding off publication to allow more-or-less simultaneous publication with its partners.

Saturday I also witnessed something new on the FamilySearch indexing progress map. Two states, Indiana and Virginia, dropped from 100% to 99%. I understand this can occur when problems are discovered during the audits performed after indexing is finished for a state. For example, auditing may discover that many indexers are incorrectly indexing column 2, house number, rather than column 3, number of household. Double keying detects some of these problems, but if both indexers make the same mistake, then arbitrators aren’t alerted and can’t fix the mistake. When auditing detects problems, the batches have to be sent back for indexing.

Louisiana had the largest percentage increase from Friday to Saturday at 10%. You Louisiana indexers keep that up and you’ll be done in eight days!

Indexing big states is going to take some time. New York is ten times as big as the recently completed Colorado. However, indexers are making great inroads. Good job if you’re indexing the great (and big) state of Texas; you are 16% done. But you California indexers. Wow! Fourth largest state, 27% complete, 2% of that on Friday! If you could keep doing 2% a day, you’d be done in five more weeks.

You are Still Needed

The rate of indexing will slow if we don’t get more help. Why? When I am familiar with the regional place and people naming patterns, I can index much faster. Pseudo-French Utah names and Book of Mormon names could be a problem for someone else, but I grew up with Lapriel and Lavell and Moroni and Alma (a man) and the others. I know what towns are in Cache County. For me, indexing was a breeze.

You are needed for your state and for the states of your ancestors. Sign up at indexing.familysearch.org.