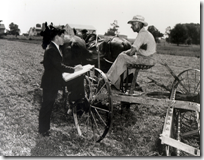 Today MyHeritage crossed the image finish line. Early in the day they finished loading all states. The online buzz about MyHeritage has been very positive. I declare them first place.

Archives.gov/Archives.com seems to be working now. They haven’t restored all the functionality they turned off, such as image pan and zoom, but they are successfully serving users. What’s more, they are handling more traffic than they measured on Monday. (This underlines the gargantuan size of Monday’s traffic. Not only was there more traffic than what was serviced, there was probably more traffic than what could be measured.) They have accomplished a megafeat and I’m giving them second place.

Ancestry.com hit 66% complete, leaving one third of the data still to load. They’ve announced a number of states are in process or coming soon (see the notes column in the table below). They will probably cross the finish line and take 3rd place Thursday or Friday.

FamilySearch advanced from 10% to 14% on Wednesday. Interestingly, as of 6pm Wednesday, they have a number of states that are available for indexing, but are not available for image access: California, Minnesota, New Hampshire, and Pennsylvania. I guess that shows FamilySearch’s priority: indexing over image availability. (Have I hit you up lately to help out? Indexing.familysearch.org )

FamilySearch also announced the order in which they will probably post indexing projects. (See the Indexing column in the table.) I would expect the images are published for browsing in approximately the same order.

RootsPoint.com is a new entry in the race. I learned of them from an article by Kimberly Powell of About.com. They have not yet posted any images. They are owned by IIMI (Intelligent Image Management Inc.) IIMI is an offshore indexing company. When organizations don’t have volunteer indexers, they go to companies like IIMI to have the indexing done “off shore.” This particular one is located in India and claims it has been hired by previous companies to index all previous U.S. censuses and U.K. censuses from 1841 to 1871. They are currently working on the 1901 census. IIMI is indexing the 1940 Census on their own initiative with the plan to sell (license) it to interested parties. RootsPoint.com will also make the data available to the general public. Basic fields will be available at no cost; additional fields will be available by subscription. For more information, ready their complete press release.