In my “1940 Census Image Viewer Comparison” article I noted how different websites took more or less time to display images. Ancestry.com took more than 3 seconds, Archives.gov took about 4, MyHeritage.com took about 17 seconds, and FamilySearch about 34.

Back on 9 April 2012 in the Monday Mailbox I made a stupid statement. “The Rowdy” asserted that Ancestry.com had the highest quality images. I replied that “NARA did the image scanning so Ancestry.com’s images can’t be better than everybody else’s.” I knew at the time that websites might modify the images prior to publication. But it seemed silly to say something like “Ancestry.com’s images can’t be better than everybody else’s unless everyone else messes up their images worse than Ancestry.” (Thank you to the several of you who kindly wrote pointing out different image qualities of different websites.)

Ancestry.com applies an algorithm to its images to increase contrast. Whites become whiter and blacks become blacker. Most people like the resulting effect, as it matches our expectation as to what a black and white record should look like. On the plus side, it makes legible text more legible. On the minus side, it makes illegible text more illegible. The increased contrast also makes it easy to compress the images. Ancestry’s images are half the size of the NARA originals. That in turn allows Ancestry to display images twice as quickly.

While not as noticeable, Ancestry also straightened the images; the originals seeming to slope a little down to the right.

Archives.gov used more compression to decrease the file size by three. You can see the effect if you zoom in close to the image. As shown below, compression causes squares to form in the background and fuzz to grow on the writing. The effect may not be noticeable at normal magnification, so long as the compression isn’t too aggressive.

FamilySearch.org did nothing to compress its images. Consequently, FamilySearch has the slowest display time. As Ancestry, they rotated the images slightly to straighten them. FamilySearch also sharpened the images. To some degree, sharpening repairs some of the focus problems. However, sharpening exaggerates errors as much as the real stuff in the image. The original NARA images have weird vertical lines covering the entire image. Sharpening makes these easier to see in the FamilySearch images, even at normal magnification.

In a side by side comparison, below, it is clear that FamilySearch.org has the sharpest images. As one might expect, the website with the slowest image display has the crispest images. 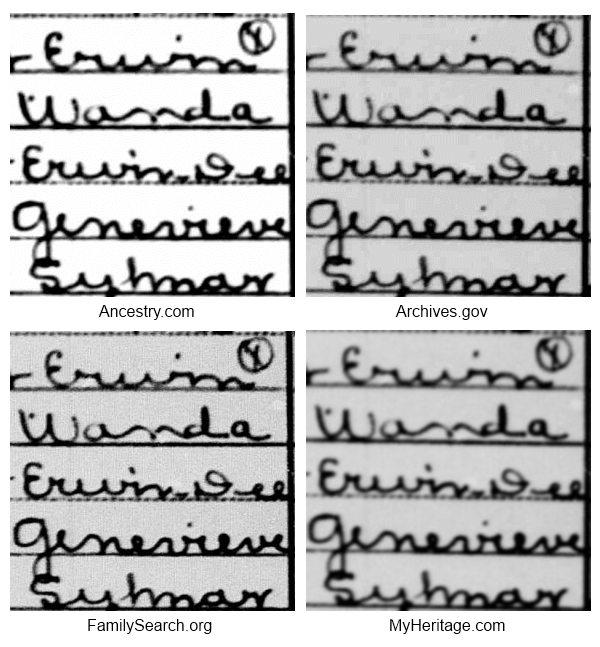