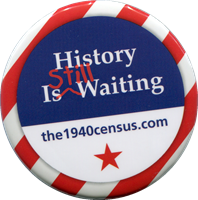 I’ve updated my 1940 Census button shown to the right. FamilySearch leads in states loaded by one. Ancestry.com holds the lead for total states and territories. NARA/Archives.com is still mostly crashed. FindMyPast doesn’t intend to post images today. MyHeritage does intend to do so.