The indexing horserace has began even while horses continue to run the image race. Since my last update six days ago, FamilySearch’s image horse made progress, moving from 26% to 82% in less than a week.

Now on to the indexing horserace. My apples and oranges report here is certain to cause indigestion, but I’m rather constrained on what I can report. 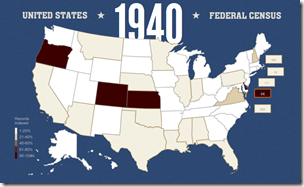 FamilySearch has indexed 5% of the census. MyHeritage has published an index for 1% of the census, while Ancestry.com is at only one-third of one percent.

As with the images horserace, I’m just measuring how far along each horse is. There’ll be time enough for comparing index quality after the dust settles. May the best horse win.

*In the table, “by 11-Apr” means the state was finished sometime since my last update. Since I didn’t check everyday, I don’t know the exact day.