It is unfortunate that Ancestry.com chose to remove the SSDI from RootsWeb. Not only was it free, but it was the best SSDI search experience on the web. While removing free access will be viewed as nefarious by some, the thinking was that thieves are less likely to pay for a subscription.

This is an example of an individual that died within the last ten years. The SSN is removed:

This example shows where and how the SSN is normally displayed:

FamilySearch redacted the SSN for the past two years. While Ancestry hides the entire line for blank fields, FamilySearch.org shows the field but leaves the value blank: 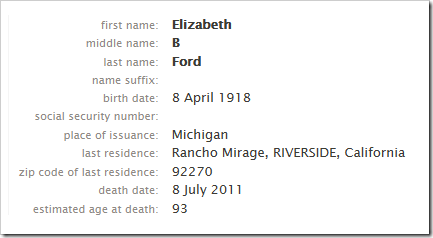 The SSDI is important because the United States lacks nationwide registration of vital events: birth, marriage, and death. These are recorded at the local level by state, county, and city governments. Just as its name suggests, the SSDI serves as an index. While the SSDI contains second-hand information, it serves as an index leading to local jurisdictions where birth and death certificates might be obtained.

The SSDI is also an index to individuals’ applications for social security numbers, form SS-5. The SS-5 is rich in genealogical information. It contains birth names, birth information, parents’ birth names, and mailing address. According to the current fee table, it is $2 cheaper ($27 vs. $29) to obtain a deceased person’s SS-5 if you have the SSN.

For many years the SSDI was unfairly accused of being a source of information for identity thieves. Quite the opposite, it has long been a mainstay in preventing identity theft. Attempted identity theft of a deceased individual is quickly detected by checking the SSDI (or DMF).

Four legislative proposals are currently under consideration to prevent this abuse from continuing. Three would delay release of SSNs of recently deceased individuals. One would totally eliminate the SSDI/DMF.

RPAC and its sponsoring organizations (FGS, NGS, IAJGS)  all submitted Statements for the Record supplementing the transcript of the March 20, 2012  hearing of the Subcommittee on Fiscal Responsibility and Economic Growth of the Senate Committee on Finance  entitled “Tax Fraud by Identity Theft, Part 2:  Status, Progress, and Potential Solutions” in response to a committee invitation to do so.