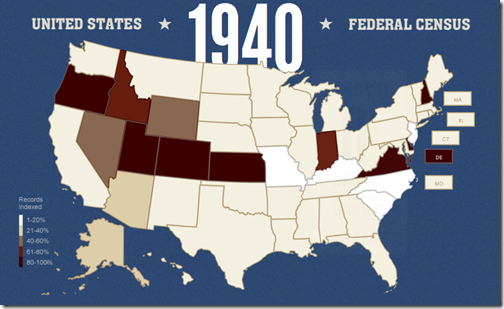 Since my update last Thursday, FamilySearch finished posting all the census images.

FamilySearch Indexing numbers indicate that they have increased the amount indexed from 5% to 11%. Compare the table below with the table in my last update to see the progress.

Progress on posting indexes is not as rosy. The posting of Delaware by FamilySearch is the only progress reported by anyone. That brings FamilySearch to one-fifth of a percent (0.21%) of publishing indexes for all the 1940 census.

Ancestry.com has not updated their indexed states list for the last 10 days. They remain at 0.30% done.

MyHeritage has also gone without updating their list, stalling at 0.82%. That is enough to keep them in first place.

It appears to me that MyHeritage.com and Ancestry.com posted indexes for one or two token states, but are now proceeding with the task of indexing all states. That may not be true of FamilySearch.

Over the weekend FamilySearch informed indexers that they could publish more indexes sooner were it not for the one week indexers are given to index a batch.

States that are nearly ready to publish can still be held up by a few remaining, checked-out batches. For this reason, as a state nears completion, we will be reducing the amount of time that a batch can be checked out. Rather than the standard seven days, batches for nearly complete states will be made available on a decreasing scale from five days to three days to just one day as we get closer to the end.

FamilySearch also announced that indexers have broken records almost every day. They indexed 20 million records and arbitrated 10 million in the first week and a half of the project.

With several states hovering at 99% (Colorado, Kansas, and Oregon), perhaps we’ll see FamilySearch take the lead in the indexing horserace.