I came across an image so hard to read on Ancestry.com, I doubted the original microfilm could possibly be as bad. It was the World War I draft registration card for Elseberry Allen of San Antonio, Texas: 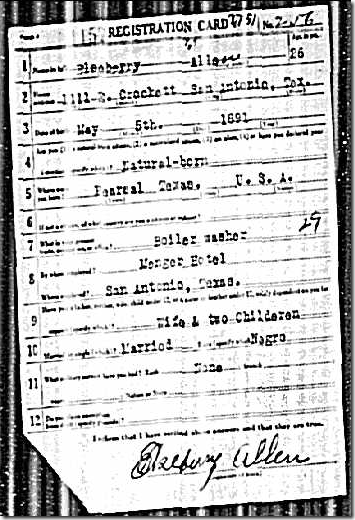 Since FamilySearch is working to get its microfilm collection posted online, I checked to see if they had World War I draft registration cards posted. If they had, I wouldn’t have to resort to microfilm.

They had, but it was not indexed.

No need to fear. Browsing to a record is challenging, but can be done simply.

In this case, I had the advantage of having already found the record using the index on Ancestry.com. The name was Elseberry Allen. More importantly, above the image Ancestry.com gave the browse path: Texas > San Antonio City > 3 > Draft Card A.

Here’s how I found the image on FamilySearch.org.

1. I started at http://FamilySearch.org. (You’re welcome to follow along. You’ll learn better that way.)

2. Down next to the world map I clicked on All Record Collections. You do this whenever you wish to browse a collection without an index.

5. I clicked Browse through 25,007,403 images. No, I didn’t plan to browse through all 25 million. Mathematically, on average, I only have to browse half of them.

Just kidding. Ancestry.com and FamilySearch divide up a record collection’s images into small sets. I didn’t expect to look at more than several dozen images, max.

6. I saw from the Ancestry browse path that I needed to click on Texas and then on San Antonio City no 3; A-O. This brought me to a set of 4,590 images (which roughly corresponded to a roll of microfilm).

Now a microfilm reader has a crank. A computer does not. Advancing a roll of microfilm by one crank, or a couple, or even several dozen is very intuitive. No one has yet brought the same intuitive function to browsing online images. So here’s whatcha do:

7. I hit the right arrow twice until I reached the first record, Albert Aaron.

The arrows are hidden in light gray and positioned so you’ll never find them. Think of it like a treasure hunt between you and FamilySearch’s designers. Hint: Currently they are hidden along the right edge of the window, just above Save and Print. Don’t worry, FamilySearch will move them to keep you sharp. (“Kato: I mean it. Do not attack me now…”)

8. I took a wild guess that the image number for Elseberry Allen was 1,000 (out of the 4,590 images). I entered 1000 (not 1,000) in the image box and then played treasure hunt again with FamilySearch. Don’t bother trying to find the button to click; there isn’t one. Press Enter on the keyboard. That took me to the record of Tom J. Cecil.

Too far, but at least I knew that Allen was between Aaron and Cecil. I wrote this down, leaving plenty of room between the two:

9. I took another guess, not quite as wild. I went to image 200, which turned out to be Atkinson. I knew Allen was between Aaron and Atkinson, so I replaced Cecil with Atkinson, like this:

11. I checked 50 and found Aguilar. Allen was after Aguilar, so I wrote this down:

12. I guessed 80. It was Alfred George Allen, a little before Elseberry Allen.

13. That left less than twenty images to look at. Twenty images isn’t bad at all. I used the right arrow several times and found Elseberry Allen at image 85. 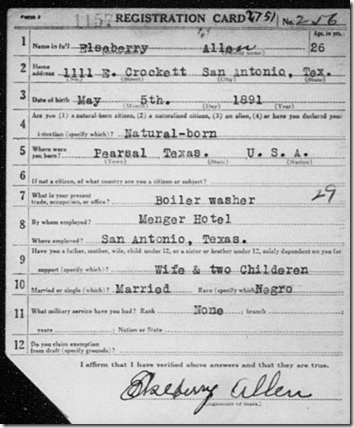 I was right. The original microfilm was much better than Ancestry’s.

And to find it I didn’t have to look at all 25 million images in the collection.

I looked at eleven.