Several years ago I read about Judy K. Wilson’s discovery that her Springfield family included a man in Alabama named Army Cannon Springfield.1 A search of FamilySearch shows that Armie Cannon Springfield died in 1962 at the age of 84 in Birmingham, Jefferson County, Alabama. A little math shows he was qualified to participate in the 3rd draft registration during World War I. Did Armie Cannon register for military service?

Finding Armie Cannon’s registration card would be simple on Ancestry.com. It has an index to the World War I draft registration cards. Finding the card on FamilySearch.org makes a good exercise of finding a record in a collection without an index.

2. Down next to the world map click on All Record Collections.

7. The result after all the browse choices is a set of images. Each image in the set is numbered. The images are usually organized alphabetically, chronologically, or in some other fashion. The cards in this set are alphabetical by surname and then given name.

For this illustration, the set of images are numbered 1 to 5,486 images for surnames LaBoutie to Z. Z indicates the end of the list, regardless of the actual surname.

8. Take a guess at the image number. Until you get a little experience, picking half way through is as good as any. There is an official name for guessing halfway between the bounds. It is called “binary search.” The guesses don’t have to be exact. For 5,486 images, half is about 2,500. Enter 2500 without a comma.

9. Image 2500 is Albert Marin Reid. Keep track of your guesses, keeping in mind whether your desired image is above or below each guess. Armie Cannon Springfield is between Reid (image 2500) and Z (image 5486).

10. Guess about halfway between the bounds you’ve established. I subsequently guessed 4500 (Walker), 3500 (Smith), and 4000. (I don’t do math very well in my head.) After several more guesses I had the range narrowed to five.

I looked through the five and didn’t find Springfield!

I had guessed the wrong draft board!

It happens. Get over it. There are eight more draft boards in Jefferson county. Using binary search, it doesn’t take long to check an entire draft board.

P.S. I eventually found Armie Cannon Springfield. Can you imagine his conversation with the draft board?

“State your given names.”

Not surprisingly, he was born on the 1st of April. 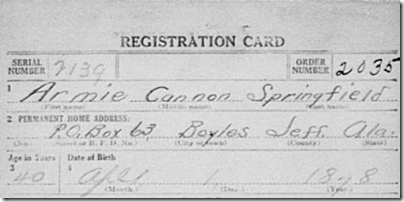 “Mom? Dad? Why did you name me Armie Cannon?”